CRUNCH TIME: WHO BOTCHED THE IMPLEMENTATION OF TEACHER EVALUATIONS IN NEW YORK? 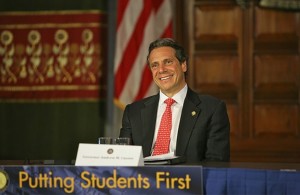 Negotiations between Gov. Andrew Cuomo and state lawmakers to tweak the state’s new teacher evaluation system continued into the final hours of the 2014 legislative session.
A few days before an agreement was reached, Cuomo blamed state education officials, including New York State Education Department Commissioner John King, for the ongoing problems with the teacher evaluations.

“In truth, the reason we’re in this situation is because the Board of Regents and Mr. King didn’t handle it,” Cuomo said at a June press conference in Albany. “That’s how we got here. These are problems that have developed because of the improper rollout of Common Core, in my opinion. We addressed the issues with the students, and now we’re trying to address the issues with the teachers.”

State education officials have acknowledged that they failed to properly inform and engage parents about the changes to the state’s curriculum. But education insiders and advocates say that it was Cuomo who pressured NYSED and the state Board of Regents to implement the teacher evaluations right away, despite calls from advocates and state legislators to take a slower approach. The governor’s push to quickly begin evaluating teachers, these sources said, directly contributed to problems that later emerged.

“There was tremendous pressure from the governor’s office to have it all done immediately across the board, to the point where they put it in their budget recommendation that you would lose your school aid increase,” an education advocate said. “So in that sense, you had a gun to your head to implement this immediately, or you would suffer loss of aid—whether you were ready or not.”

The new evaluations exacerbated the stress and confusion of parents and teachers as they adjusted to the major education overhaul. Teachers worried that in addition to having to learn a completely new curriculum and introduce it to their students, their job security depended on their students’ performance on the Common Core-aligned tests—fears that were heightened when only about 30 percent of students passed the English Language Arts exam in 2013, the first year of testing.

On Wednesday, in the first and only televised debate of the 2014 gubernatorial race, Cuomo echoed these concerns, saying that new Common Core testing was “chaotic, it’s caused anxiety, it’s caused stress, there’s too much testing, too little learning.”

But critics argue that the decision to speed forward on implementing both teacher evaluations and new Common Core standards—each top Cuomo priorities—made it harder for either initiative to succeed.

“There’s no question that the governor is the person who has pushed the teacher evaluation system, rammed it down our schools, despite the fact that everyone knew it was dramatically flawed from the moment he started pushing it through,” said Billy Easton, executive director for the Alliance for Quality Education.

The governor’s office did not respond to requests for comment.

In 2009, under former Gov. David Paterson, New York became one of the first states to voluntarily adopt the Common Core standards, in order to qualify for $696.6 million in federal funding through the Obama administration’s Race to the Top program. To receive funding, states also had to agree to implement a full teacher evaluation system tied to the Common Core state tests.

New York, which opted not to do a pilot program, began a full-fledged teacher evaluation system during the 2012–13 school year, well ahead of the federal schedule.

“Going on at the same time you had the rollout—going on faster and earlier than virtually any other state, with the exception of Kentucky—of the Common Core,” the education advocate said. “So not only do you have a rush to implement an unproven evaluation system, but you’re shoehorning a massive and unprecedented overhaul of curriculum and testing.”

Some critics also argued that Cuomo exacerbated the problems by tying the adoption of teacher evaluations at the local level to state and federal education funding.

Although most school districts complied by instituting teacher evaluations, a few did not. When the Bloomberg administration and the New York City teachers’ union failed to reach a deal on a new teacher evaluation system in January 2013, city schools lost about $450 million in state and federal aid.

A month later in February of 2013, 19 state lawmakers sent a letter to the governor urging him to postpone the teacher evaluation system.

“The use of an assessment system based on unproven methods of determining teacher effectiveness is a mistake with potentially disastrous implications,” Assemblyman James Brennan, a Democrat from Brooklyn, said in a statement. “While I share the governor’s commitment to increased accountability in our school system, it is absolutely essential that any review process that determines the employment and compensation of any individual be shown to be accurate and reliable.”

While New York initially chose to move quickly, the federal government has gone in the other direction by allowing flexibility in meeting its requirements.

The U.S. Department of Education has issued letters to states warning that delaying teacher evaluations too long could result in the revocation of Race to the Top dollars, but it wasn’t until last April that Washington became the first state to lose funding for failing to set up teacher evaluations tied to Common Core-aligned state tests.

Many states faced similar struggles, so in June of 2013 the federal government offered a waiver to provide states latitude in using student achievement to evaluate teachers. Since then, about 15 states—including New York—have sought at least a one-year delay for employing student scores as a factor in the evaluation of its teachers.

As part of the state budget this year, Cuomo and legislators agreed that new Common Core-aligned tests would not be used until 2022 in determining whether a student passes or fails. At the end of the 2014 legislative session, a compromise was reached that delays for two years the impact of students’ test scores on evaluations for the lowest-performing teachers. The adjustments came after a dramatic drop in scores in the first round of Common Core tests prompted widespread outcry.

“The governor wants to own the teacher evaluation system whenever he’s trying to burnish his credentials by saying he’s done something ‘historic,’ ” Easton said. “But it’s full of problems, and he doesn’t want to own any of those problems.”

Earlier this month Cuomo said that despite the recent modifications the current teacher evaluations will again need to be revised next year. The 2012–13 teacher evaluations released in August found that 94 percent of teachers were rated either “effective” or “highly effective,” while only 31 percent of students grades 3–8 statewide were proficient in English Language Arts and math, based on state tests. Cuomo has said more needs to be done to make the evaluations “meaningful and strong and relevant.”

But now, as he runs for reelection, Cuomo has embraced a slower pace. While he remains a strong proponent for accountability and the teacher evaluation system, in a recent campaign ad Cuomo says he wants to “disregard student test scores for at least five years … and then only if our children are ready.”