Buffalo’s New Board of Education 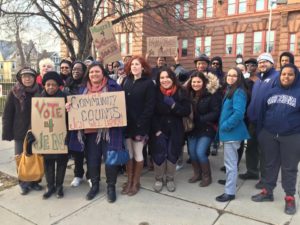 Earlier this week, residents in the City of Buffalo made their voices heard. A new school board was elected on Tuesday. The community demanded a school board that will make Buffalo’s public schools the best they can be so that their children have the opportunity they need for success.

For years, Buffalo’s public schools have been led by a school board mostly made of up members who moved the public schools system toward privatization and enacted policies that created an unjust, two-tiered education system.

The results of Tuesday’s election are in, and the candidates endorsed by Citizen Action all won!

Throughout this campaign season, Citizen Action was in the action through the work of some pretty amazing people. While many of our members volunteered with campaigns, I want to take a moment to highlight one member in particular.

Eve Shippens is a Buffalo Public Schools teacher. She’s been a teacher for 15 year and taught at a number of schools. She spends countless hours preparing to teach our students and then spends countless hours fighting for public schools with organizations like Citizen Action, the Buffalo Parent Teacher Organization, and others. This year, she stepped out on faith and became the campaign manager for Jen Mecozzi. Without much experience in running campaigns, she more than made up for it with passion and a determination to oust those aligned with former majority on the school board. She has gained valuable experience and is a force to contend with when it comes to the children of Buffalo.

Her candidate, Jen Mecozzi, was encouraged to step up and run by Citizen Action’s former lead organizer, Brian Trzeicak. Although after years of service Brian has moved on to other endeavors, he followed this challenge to the end by providing support, debate tips, and people to participate in the campaign.

All of the candidates that Citizen Action endorsed have won seats on the Board of Education. This sends a clear message that our communities are ready to fight for our children’s future.