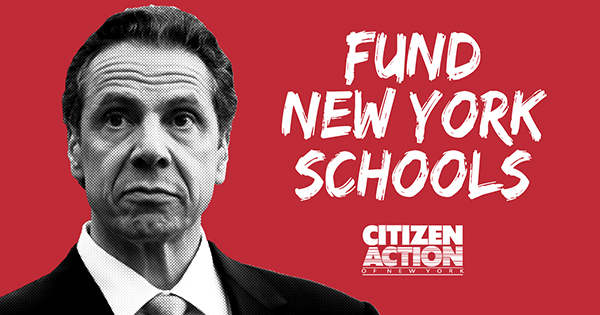 When it comes to cutting taxes on millionaires and billionaires and working to privatize public education, Governor Cuomo has a lot in common with Donald Trump.

A court ruled that New York State must give public schools billions more in funding. It’s been 10 years and New York still owes $4.3 billion to our schools. In the state budget he released this week, Governor Cuomo proposed getting rid of that funding commitment altogether!

It’s an unprecedented attack on the education of students in poverty, students of color and immigrant students.

At a time when Donald Trump and his billionaire education secretary are threatening to strip resources from our schools, Governor Cuomo should be doing everything he can to lift our students up. Add your name now and join Citizen Action and 13 New York legislators – all women of color – calling on Cuomo for full and fair funding for all New York students!

Instead of making the wealthiest 1% pay their fair share, Gov. Cuomo is shortchanging our kids.

Here’s what it comes down to: New York has one of the biggest gaps in the country in funding between schools in poor districts and wealthy districts. If a student happens to go to school in a wealthier zip code, they get $10,000 more per year in funding for school supplies, teaching time and after-school programs than a student who happens to live in a poorer district.

Because 58 percent of the missing state funding is owed to students of color, Gov. Cuomo’s move only serves to perpetuate racism in our education system.

We’re keeping the pressure up on the governor every day as part of the Alliance for Quality Education. In October, parents, students and teachers from across the state walked to Albany to mark 10 years of state inaction. Now we’re bringing the fight into negotiations that state leaders are having on the 2017 budget.

We need Cuomo to hear from thousands of people who agree that his plan to eliminate the funding owed to schools that need it most is outrageous.

Thanks for all that you do,