I just experienced the weirdest fire drill of my life. Here’s how it happened. I was practicing “power walks” for tomorrow’s Education March, when all of a sudden I heard the fire alarm. When I stepped into the hallway, I was greeted by pretty much everyone who works in our building standing around a short man with a brown blazer. Let’s call him Fireman Joe. Mr. Joe walked up close, looked me directly in the eye and whispered, “Don’t Record Me.” He then went on a ten-minute rant about fighting “bozos” in staircases, rigging elections, and what to do if there is a power outage in the building. IT WAS AMAZING! If only he could do a presentation every day. I’ll try to replicate his energy and passion in recapping our work this week.

We are a people-powered organization. Support us in the movement for justice 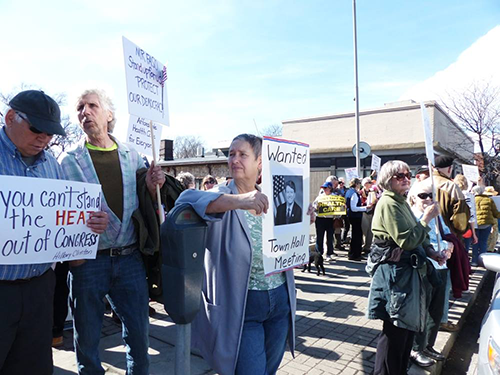 Special Delivery. After weeks of protesting at Faso Fridays and at the #NoShowFaso town hall on Friday with nearly 1,200 of Faso’s constituents, the Hudson Valley Chapter of Citizen Action still isn’t done. On Monday, February 28, they delivered hundreds of postcards and even more questions to Rep. Faso’s office. Faso is so used to constituents coming to his office looking for answers, he opened a pop-up district office in his parking lot. I think he knows we’re here to stay. 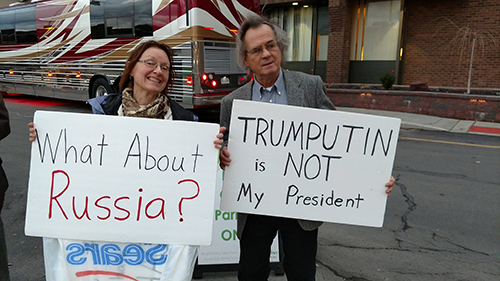 The People Will Come to You.  On March 2, the Southern Tier Chapter continued to push Congresswoman Claudia Tenney. After Tenney was a no-show at a town hall the community organized, over 30 activists and constituents protested outside of her new Binghamton office. If Tenney wasn’t going to address their questions at the town hall, they would bring their concerns right to her. After the crowd’s chanting and singing, a representative delivered a flash drive with footage from the town hall and testimony from constituents worried about their health insurance.

Standing With Our Allies. On February 26, the Western New York chapter of Citizen Action took a stand with our allies in the LGBTQ movement by participating in a march for transgender rights. The event was organized after the Trump Administration attacked the well-being of transgender children in our nation’s schools by rescinding protections for transgender youth put in place by former President Obama. 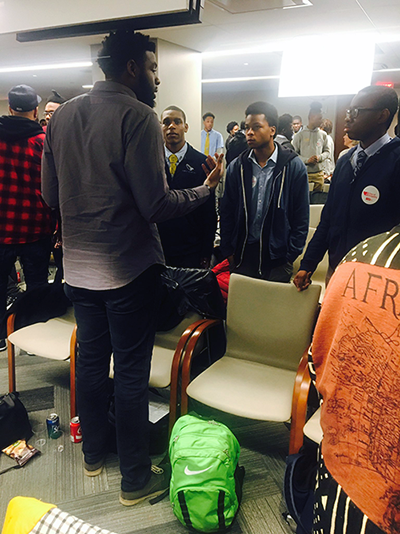 Governor Cuomo has gone out of his way to look like the progressive champion of New York, but his budget proposal for education looks a lot like trickle down economics. I decided to call him out for this behavior in the Huffington Post. Click here to read.

This week in the Activist Check-in Podcast, I spoke with a good friend, mentor, and Greenpeace board member Karen Topakain. Karen was one of the activists who hung the “Resist” banner behind the White House. In this episode, she’ll tell us how Greenpeace came up with the idea, the role she played in it, and how people responded. Click here to listen.

Hudson Valley 1–  John Faso has been on a major press run since he ditched a community town hall organized by Citizen Action’s Hudson Valley Chapter. This is his latest excuse. Click here for the story.

Binghamton Homepage– Citizen Action’s Southern Tier chapter held protests outside Congresswoman Tenney’s new Binghamton office after she refused to show up to their town hall. Tenney joins Faso in the list of NY Rep’s ducking their constituents. Click here for the story.

Time Warner Cable- The Alliance for Quality Education released a video that shows the disturbing similarities between Donald Trump and Governor Cuomo on Education. Click here for the story.

March 4. On March 4, students, teachers, parents and community members across New York State will come together for the People’s March for Education Justice. Click here to RSVP.

March 7. Join us as we head up to Albany to demand the NY State Raise The Age. Click here to RSVP.

March 11. Citizen Action will host a showing of the Netflix film “13th” followed by a discussion of the issues raised by this important film. Click here to RSVP.

Instead of working to build on the progress of the Affordable Care Act and toward making universal health care a reality, Donald Trump and Republicans want to roll the dial back and take coverage away from as many as 30 million people. Help us put an end to this, tell congress that health care is a human right- not a privilege for the wealthy few! Click here to take action!