I hope you and your loved ones are safe and doing well. The moment of truth has come. State leaders delivered a final budget agreement that is disappointing, to say the least. The choice was clear: cut vital funding during a global crisis or raise taxes on billionaires to raise revenue. New York has more billionaires than anywhere else in the world, but instead of taxing them, the budget was balanced on the backs of average New Yorkers. Governor Cuomo got the austerity budget he wanted. Read our Co-Executive Director Rosemary Rivera’s statement in response to the state budget here.

A bright spot in the budget is that we finally have permanent paid sick days statewide! This is a huge victory! Special shoutout to our Statewide Campaigns Director Blue Carreker who has worked tirelessly with our coalition partners as a facilitator with the New York State Paid Leave Coalition, and leaders in government, as well as the many community leaders and organizers who helped get this law passed. Workers can now accrue paid sick time and can begin to use that time on January 1, 2021. Read more in our press release here.

We took some losses in this budget with the approved changes to bail reform and lack of investment in the priorities we’ve been fighting for since the start of session. But all is not lost.We brought a lot of truths to light. Our issues were elevated and more people are paying attention. We showed how strong this movement is and that we will not be broken. And we still have elections to look forward to. Let’s help our progressive candidates win!

Andy Zygmunt has been a member at our Central New York chapter since 2017. Andy is usually out petitioning and engaging community members, and helps with research for the region’s Education Justice Committee. Andy works with the chapter and Indivisible Mohawk Valley to protect bail reform, the Utica Common Council public comment period and to push the Utica School Board to follow the New York State Open Meetings Law.

Andy recently sent  8,439 Shadow Chat text messages to voters on Long Island and around the state. “COVID-19 might have changed his platform for voter engagement, but it didn’t knock him off his game,” said Kristina Andreotta, our regional director. “Andy is a true champion of democracy in every sense.”

On Friday, April 3, we joined community and labor groups and state legislators from across New York State for a press conference in response to the state budget, and demanded that state legislators reconvene to pass taxes on millionaires and billionaires to prevent rolling budget cuts.

“@nygovcuomo‘s interest isn’t protecting the most vulnerable, it’s his own political power and poll numbers…This couldn’t be clearer than in the bail reform rollbacks putting more people in prison in a pandemic…This budget is the peak of narcism and racism.” –@StanFritz

“It’s gross and it’s cruel and thoughtless to think that it’s tougher to tax the rich when we need to, but then find it so easy to kill the poor…I fought so hard to put $3 billion towards NYCHA, but it wasn’t even a thought.” –@yuhline 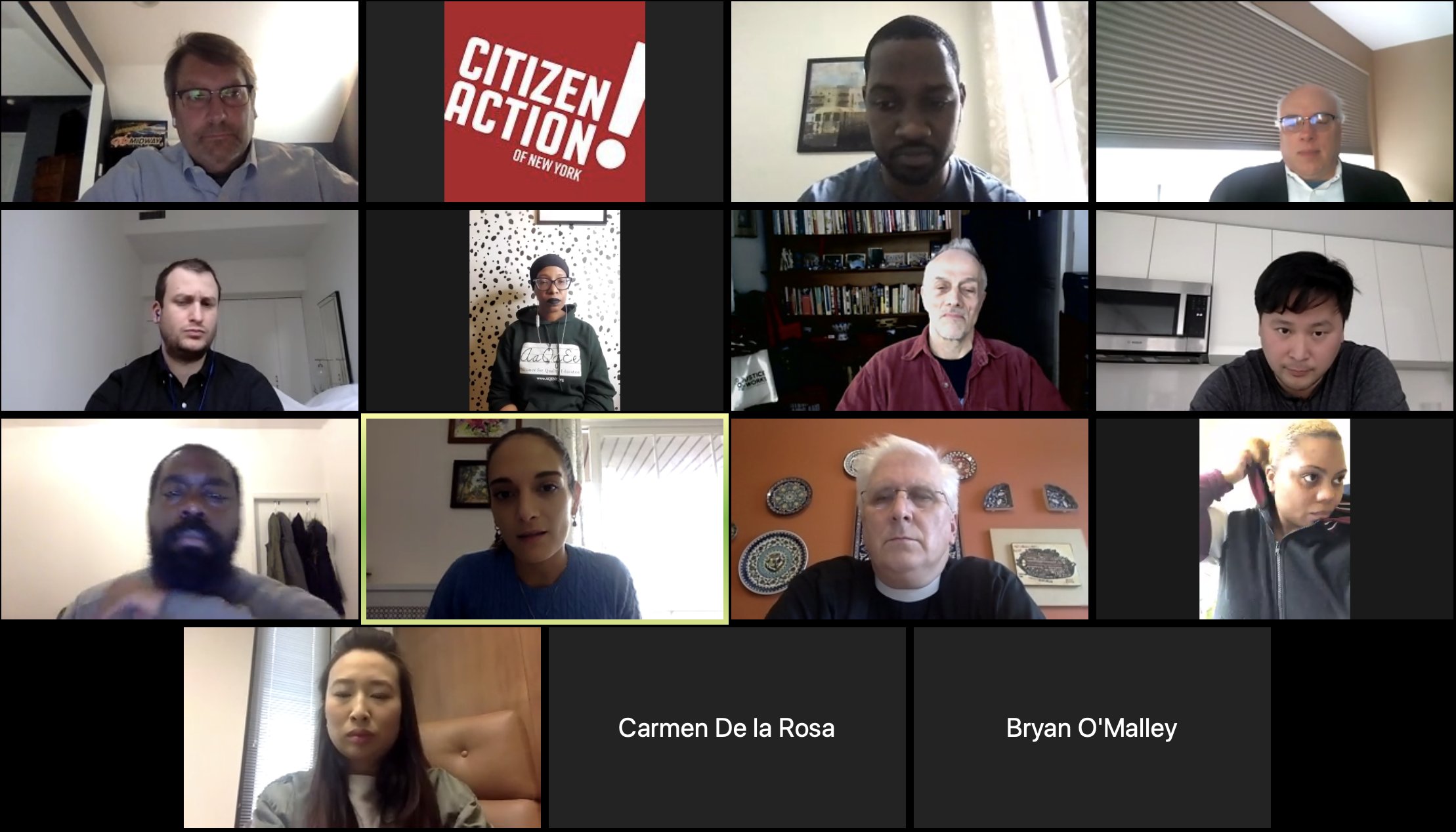 Staying in doesn’t mean silenced or disconnected. This campaign was a huge success on social media. So many went the distance with us on this. Members and supporters from across the state posted pictures holding signs with hashtags urging legislators to vote no on a budget that makes devastating cuts to our communities in a time of crisis. It was a social media storm. See some photos below:

Check out this bail reform video by our Statewide Civil Rights Organizer Clyanna Lightbourn calling on Senator Neil Breslin and Assemblymember John McDonald to vote NO on this year’s budget due to the bail reform rollback measures in it.

On Thursday, April 2, our Central New York chapter members made time to be in the community together. They gathered on Zoom to check-in on one another and also talk about ways to move their work forward in light of social distancing. The chapter also launched a petition calling on the Utica Common Council and Mayor to use federal COVID-19 emergency funding to help impacted Utica residents make rent. Governor Cuomo has not yet canceled rent for millions tenants who are out of work right now.

On Monday, March 30, we joined the Alliance for Quality Education (AQE) for an Emergency Virtual Rally.

And on Tuesday, March 31, our Rochester chapteralso joined AQE, City-Wide Tenant Union of Rochester, NYCLU and Housing Justice for all for a virtual meeting titled, State of the City: A Community Response to the Pandemic. After cutting more than 100 positions midway through the school year, Rochester City School District is planning to cut nearly 200 more positions and 31 social workers.

Wednesday, April 8 – Education Roundtable: Breaking Down the NYS Budget: Join Citizen Action and Alliance for Quality Education for a discussion on the recently enacted state budget and what it means for Rochester schools. RSVP on Action Network here.

Now Until April 27 – Virtual Phone Bank for Bernie Sanders for President: Join the New York team to call voters! If you’re new to phone banking, don’t worry. There will be brief demos at the start of each shift. Click here to RSVP. Access the video link here.

Saturday, April 28, 1:30-4:30 p.m. – Building a Bigger We: Housing Climate + Racial Justice Solutions: Join us to discuss the cross-section of housing, climate and racial justice and how these injustices and a lack of energy justice impacts our communities. RSVP here.

“It’s okay if it takes time to make sense of all this.” – sunnybloominspiration