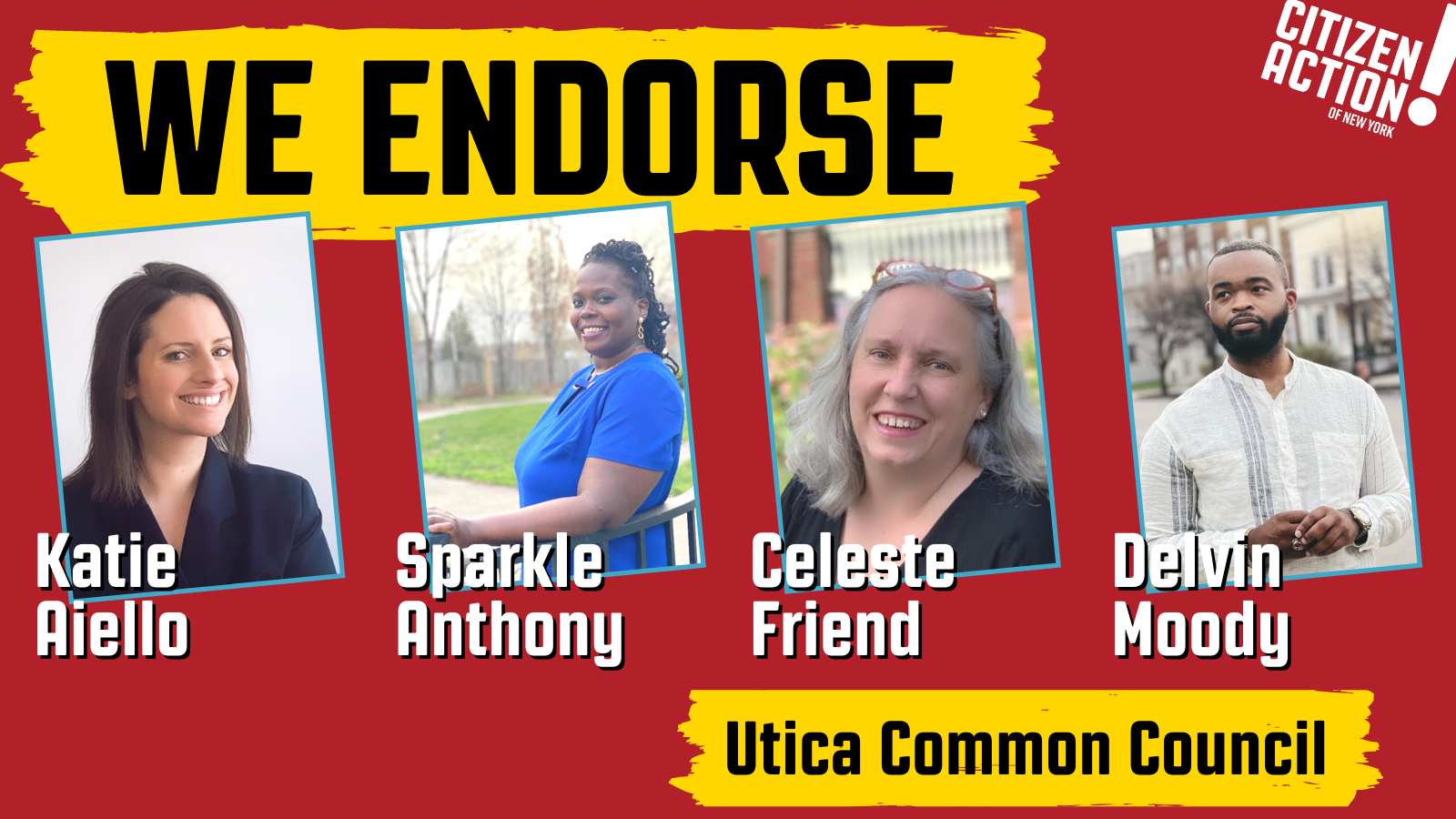 Utica, NY – Citizen Action of New York announced its endorsement of Utica Common Council members Celeste Friend in Ward 3 and Delvin Moody in Ward 5 for re-election. At the height of the pandemic, Celeste and Delvin fought alongside Citizen Action leaders to win rent relief for tenants and homeowners, and they continue to fight for a Utica that works for the many, not the few. Citizen Action also endorsed Katie Aiello in Ward 1, and Sparkle Anthony, member-at-large.

Utica residents are still struggling with the pandemic’s impact on their homes, businesses and futures. Families have been pushed deeper into poverty, and housing and food insecurity are on the rise. Citizen Action knows that these four candidates will fight to make sure Utica works for all of us.

“As a business owner in downtown Utica and a mother to two young girls, I am passionate about seeing every facet of our city succeed. We are proud of the continued growth and progress in downtown Utica. To keep this growth going we must be mindful that we aren’t overlooking the needs of the people that live here in our pursuit of economic development. From Milgate Street to Barnes Ave, and everywhere in between, we will work to put the people of 1st Ward first,” said Katie Aiello, Democratic candidate in Ward 1.

“I’m running for re-election because I believe that when responsive elected officials and engaged constituents work together, we can create a Utica that will really be a good place for all of us,” said Celeste Friend, Councilmember in Ward 3.

“Up until two years ago, I didn’t vote for eighteen years. I felt discouraged and helpless. I thought: Why should I participate with a system that is broken? Why should I waste my time? Until I changed my way of thinking and realized that with the help of the people, I could help change what needs to be fixed. So now I’m running to bring the voice of the people to City Hall, to make this city work for me and for everyone who lives here,” said Sparkle Anthony, candidate for Utica Common Council member-at-large.

“As a progressive, nothing feels better than knowing I have the support of Citizen Action! I decided to run again simply because progress is possible, change is imminent, and our future is not expendable. Cornhill needs a fighter and for the past 2 years, I have been that champion. This is not half, it’s just the first quarter and I’m in this until the end,” said Delvin Moody, Councilmember in Ward 5.

“Our endorsed candidates share Citizen Action’s commitment to racial justice. As council members, Celeste and Delvin have demonstrated a strong record of community engagement. This slate of candidates is working to advance a progressive worldview in Utica and in New York as a whole, where everyone’s basic needs are met. They move us one giant step closer to having a common council that actually represents the people of our beautifully diverse community,” said Chelsea Arcuri, a community organizer at Citizen Action’s Central New York chapter.