As the state legislative session was wrapping up, Citizen Action held its annual staff retreat. From June 9-11, we convened at the Desmond in Albany, some of us meeting for the very first time! Last year, our annual staff gathering was virtual due to the pandemic. Folks have been (safely) gathering for actions and other events that have been highlighted in our weekly emails, but this was the first time in about 18 months that all Citizen Action chapters were in one place together!

In honor of Juneteenth, we’ll be closed on Friday, June 18. Juneteenth has been celebrated on June 19 every year since 1865. Juneteenth is an historic celebration commemorating the emancipation of slavery and the day — two years after the Emancipation Proclamation — when enslaved people in Texas got word of their freedom. President Biden just made Juneteenth a federal holiday! To read more about the history of Juneteenth, click here. Juneteenth is a time to celebrate Black culture and recommit ourselves to fighting for a world free of discrimination and full of equality. 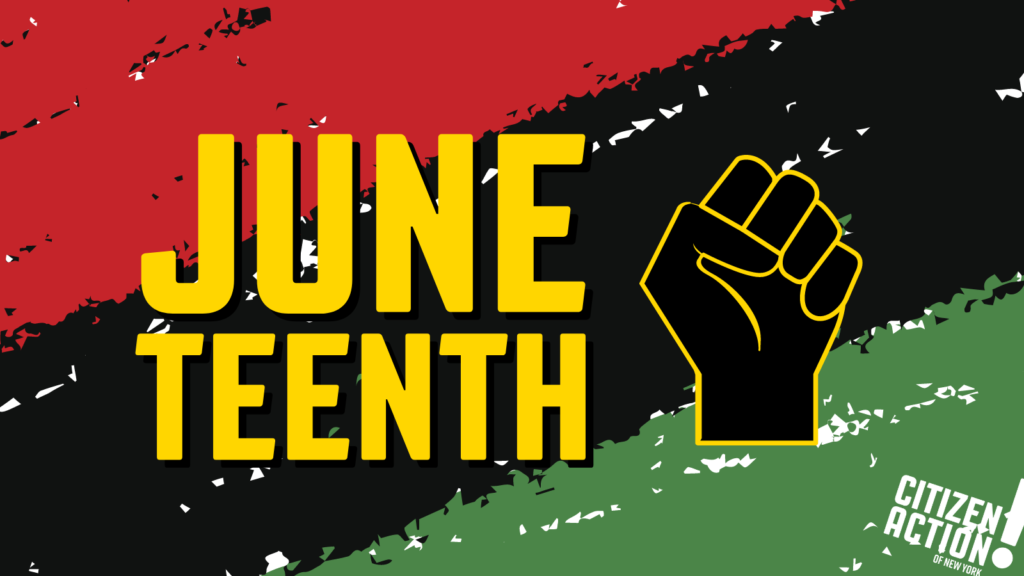 Early voting is in motion, but it ends on Sunday, June 20. Click here for more info on early voting. We’re just days away from the primary elections on June 22! Below, you’ll see some of the events Citizen Action chapters took part in this week, including endorsement announcements. Check here for our full list of endorsements.

For the People Act Town Hall 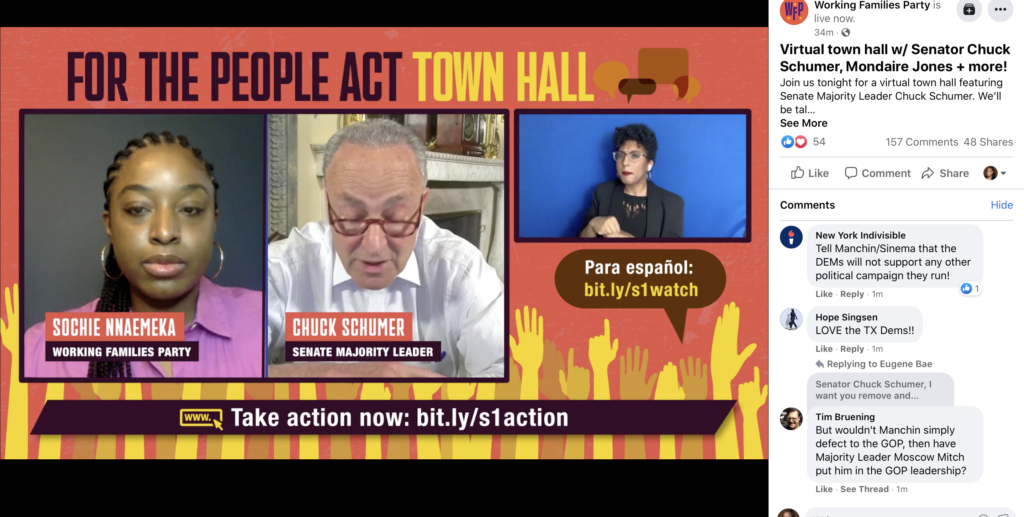 This week’s For the People Act Town Hall with Senate Majority Leader Chuck Schumer was such a good time! Hosted by Sochie Nnaemeka, New York State Working Families Party Director, we heard from NY Attorney General Tish James and Representatives Jamaal Bowman and Mondaire Jones. Senator Schumer committed to passing the For the People Act intact during the town hall, especially small donor matching for Congressional elections, which will help decrease the power of big money in our politics. Our democracy works when more candidates of color from our communities can run for office. The For the People Act, known as S.1., is the most important voting rights bill of our time. Click here to watch a recording of the live stream on Facebook. 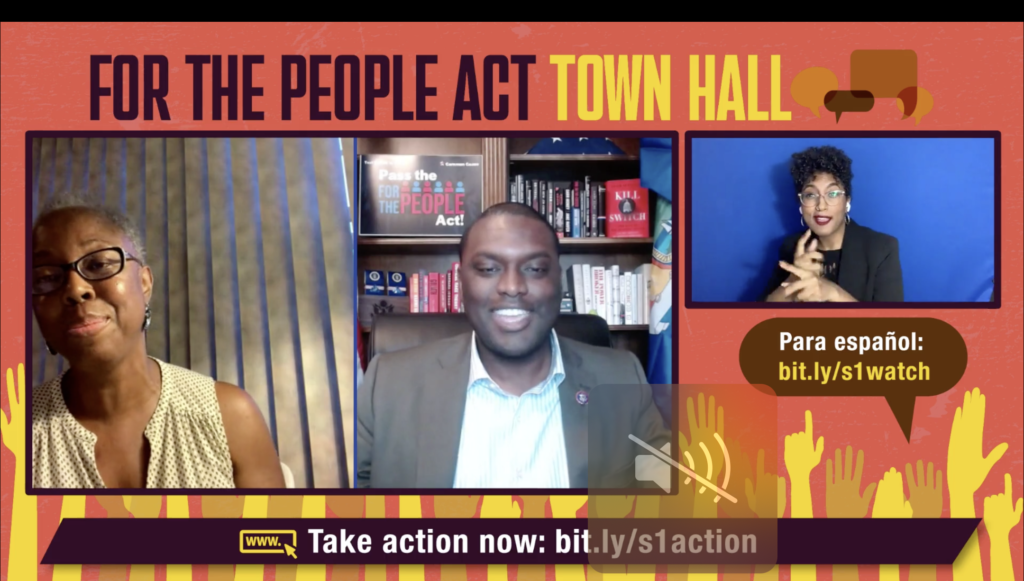 Benjetta Miller, Citizen Action state board member and a member of the Long Island Progressive Coalition, asked Rep. Mondaire Jones, NY-17, the following question: “What will S1 do to address dark money and to empower regular people to influence policymakers?”

This campaign season has been intense, with lots of controversy surrounding the races. Citizen Action of New York has officially endorsed Maya Wiley for NYC mayor. Our NYC chapter was out this week to show support for Maya’s campaign as we head into GOTV weekend. Maya has a progressive approach to policy-making, understands the issues, and loves the city. We know she’ll fight for strong public schools, housing justice and public safety that prioritizes our communities. Click here to view our tweet. 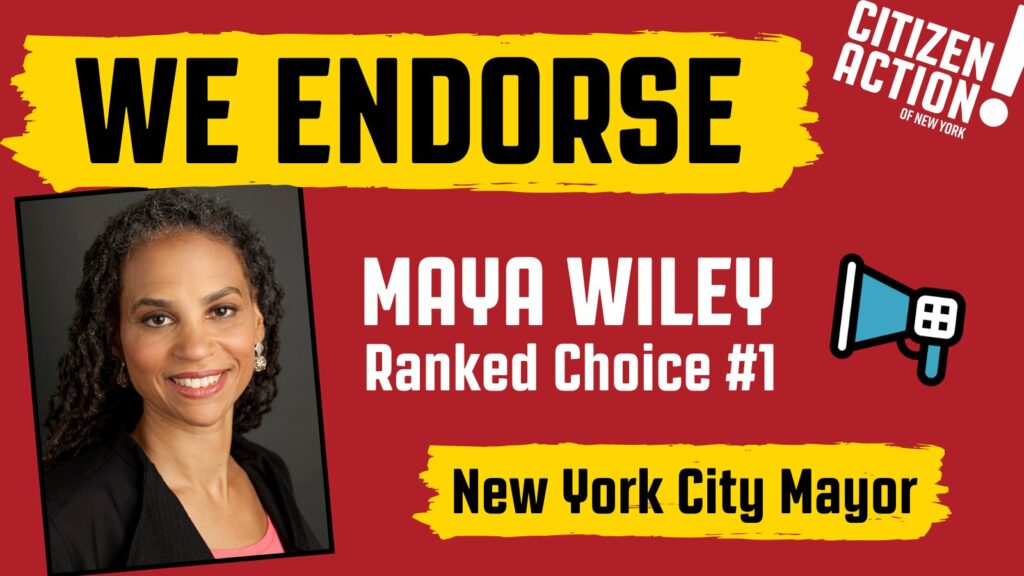 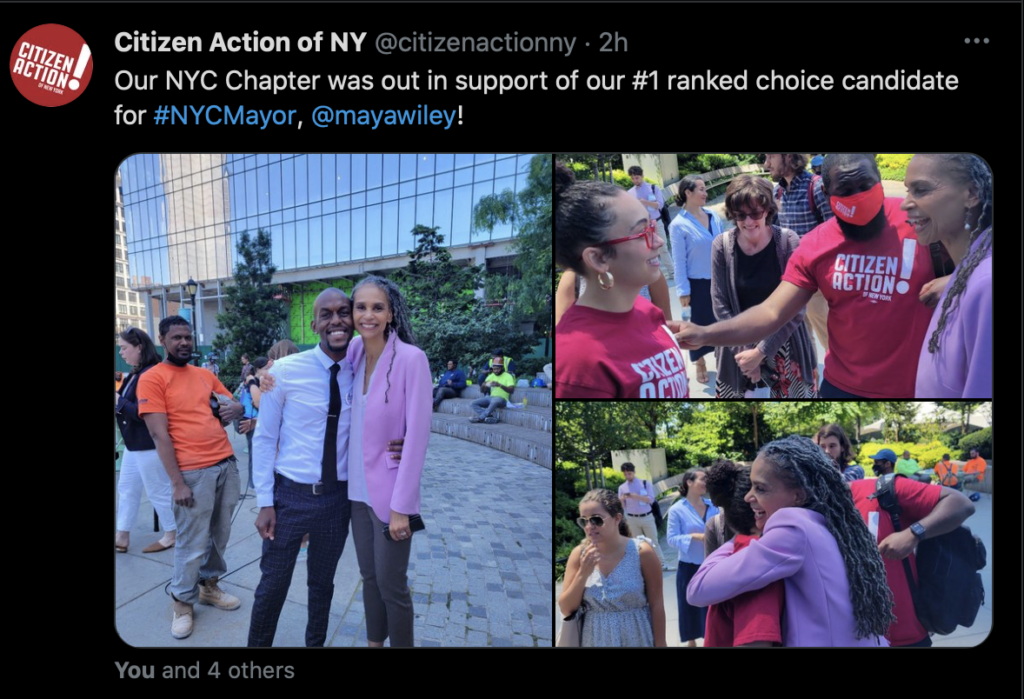 Our NYC chapter gave Mark Levine the first choice ranked endorsement and Lindsay Boylan their second. As a Councilmember, Mark was the lead sponsor of the city’s historic Right to Counsel legislation, which guaranteed legal representation for tenants in housing court. Click here to read our full announcement. 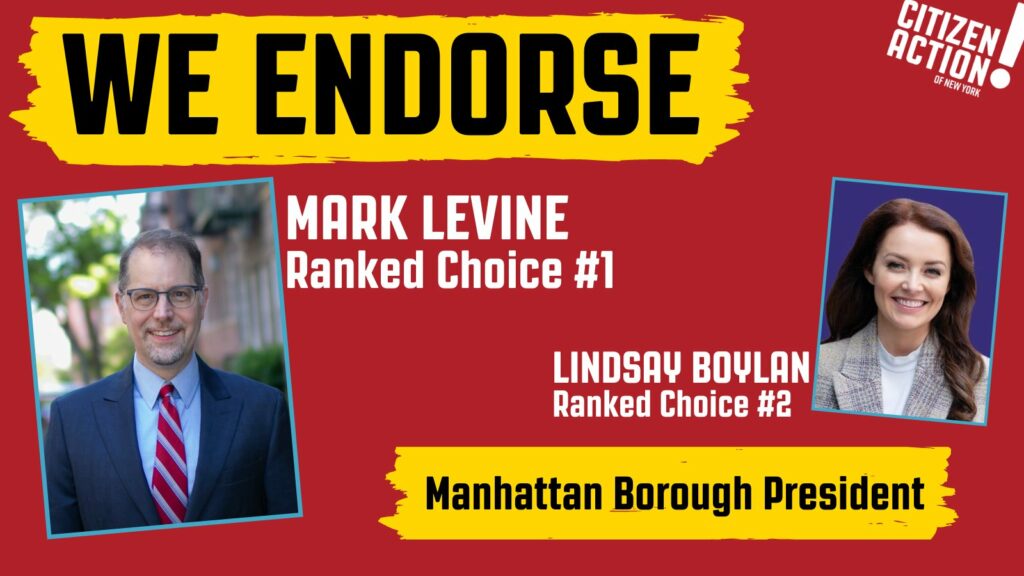 The chapter also ranked Cesar Vargas as its first choice for Staten Island Borough President and Lorie Honor as their second choice. The endorsements serve as the official launch of our Staten Island chapter. The Borough President race is the start of what the chapter hopes will be a progressive wave in the notoriously conservative borough. Click here to read our full announcement.

“Citizen Action is an organization that fights the good fight. We are committed and dedicated towards more diversity, inclusiveness and equity in our communities. We decided to endorse a person who embodies who we are: bold, unafraid and willing to be on the frontlines for change. Staten Island is writing a new political chapter and we will stand with our Staten Island branch. Cesar Vargas is the candidate to help usher in a new Staten Island,” said Jasmine Robinson, Citizen Action New York City Regional Board member. 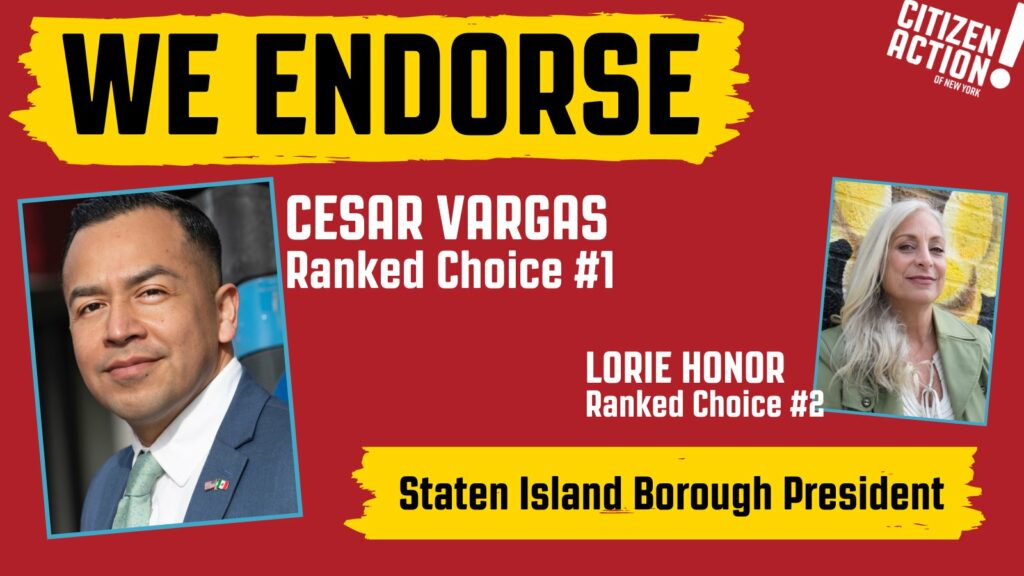 On Thursday, June 17, our Co-Executive Director Rosemary Rivera issued a statement in response to the Supreme Court ruling upholding the Affordable Care Act (ACA). Citizen Action helped coordinate New York’s effort to win the ACA, which passed in 2010. “Today, the Supreme Court ruled in favor of 23 million Americans who were at risk of losing their health care during a global health crisis. For the third time, the Affordable Care Act (ACA) has been upheld by our nation’s highest court.” Click here to read Rosemary’s full statement. 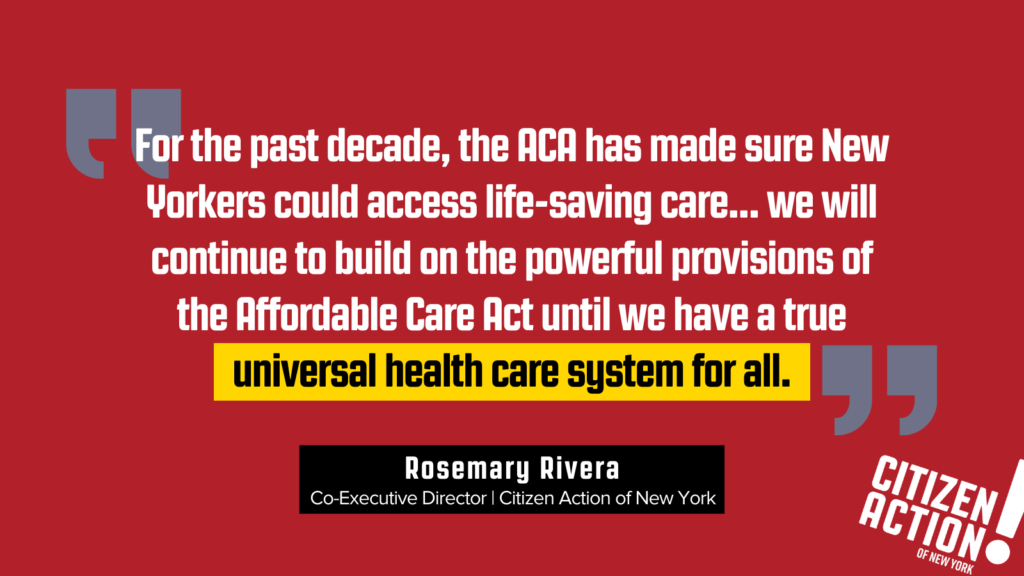 The 2020 election saw historic voter turnout, an amazing display of democracy in action – now there is a backlash to that turnout by conservative lawmakers. But we can fight back! Click here to send an email to Senate Majority Leader Chuck Schumer and urge him to pass the For The People Act to protect and expand the freedom to vote!

Justice Works is New York’s premiere conference bringing together hundreds of progressive organizers and activists from across the state to train, share, network, teach and learn with each other. Click here to reserve your spot now!

Justice Works features workshops, speakers and performances highlighting the community organizing and civic engagement currently being done in New York. This year, Justice Works 2021 will take place virtually July 17-18. We are so pleased to announce one of our keynote speakers, Sarah Lewis!

Sarah Lewis is among the most insightful and eloquent speakers on race in America, one of only two professors ever hired at Harvard to focus on African-American art. Her research focuses on the intersection of African American and Black Atlantic visual representation, racial justice, and representational democracy in the United States. Click here to reserve your spot now!

Citizen Action of New York is building power in communities across the state. Our members are the reason we’re able to do effective grassroots organizing and achieve justice for our communities. Our members give what they can when they can and each contribution is directly invested in local leadership development. Click here to support.

“Make ambitious goals, never give up no matter the circumstances. Choose to live! Choose to do for and save the children in your community. Always create, always think and always analyze. Learn from our mistakes and celebrate our triumphs.” – Afeni Shakur