It’s been another action-packed week! As expected, state legislators have not reached an on-time budget by the April 1 deadline. Given the complexities of this budget season, I’m not really surprised at the outcome. There’s an open investigation against the Governor, historic bills are moving through the legislature, and the state is considering whether to raise taxes on the rich…and New York is slowly becoming a COVID-19 hotspot, again. The budget is expected to be finalized next week. With more time on the clock, activists in communities across New York joined our chapters and partner organizations with the Invest in Our New York coalition, to demand that not a penny be cut from our communities. Governor Cuomo has been pushing back against our calls to tax the rich, because he is more concerned with protecting billionaire profits than the well-being of his constituents. Now, the legislature’s proposed tax increases on the rich that would have generated about $7 billion in new progressive revenue, is in jeopardy of being cut from the budget. Governor Cuomo would rather invest less in our communities than tax the wealthy.

This week, we saw decades of grassroots activism pay off with HALT Solitary Confinement Act and the Marijuana Regulation and Taxation Action becoming law! New York became the 15th state to legalize marijuana for adult, recreational use. Some of the most talked-about provisions of this transformative legislation are the revenue reinvestments in our communities, the decriminalization of marijuana odor, priority licenses for marginalized communities, and the clearing of marijuana arrest records! Click here to read a statement from our Political Director Stanley Fritz.

On Thursday, April 1, Citizen Action organizers were arrested following an action of civil disobedience in Albany where they demanded an end to evictions and a budget that invests in all of us. The action coincided with the April 1 budget deadline and the day that rent has been due for the 12th month since the pandemic started. We are calling on Assembly Speaker Carl Heastie and Senate Majority Leader Andrea Stewart-Cousins to “hold the line,” and defend their progressive revenue raisers in the budget. 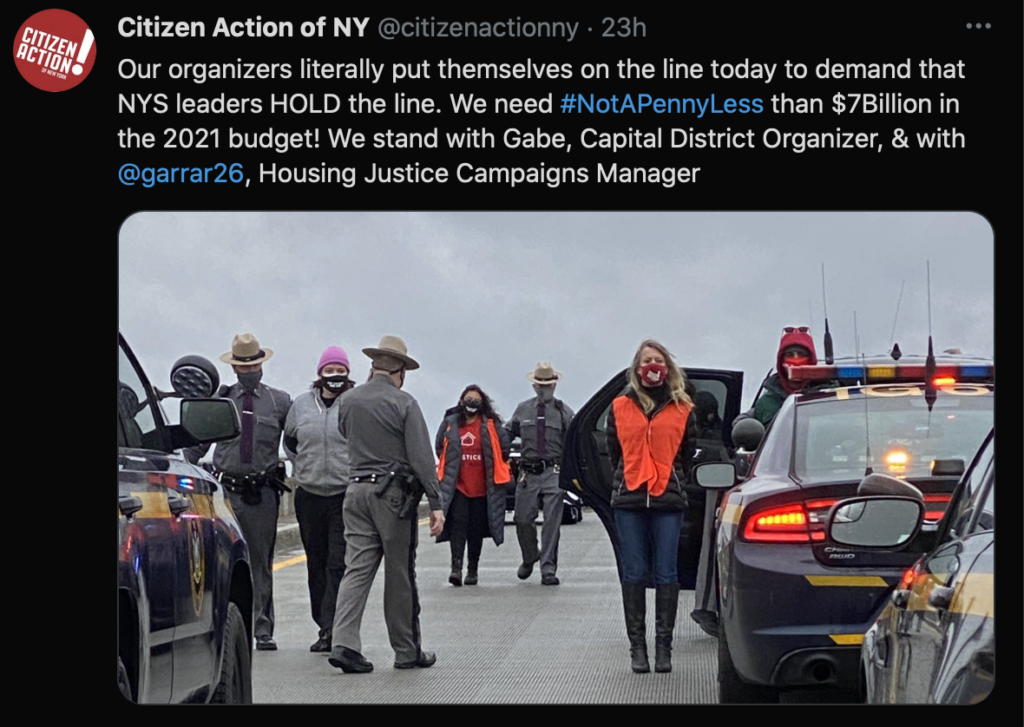 This week, our New York City chapter rolled out another ranked choice endorsement, this time for New York City Council District 36 in Brooklyn. Citizen Action is backing Chi Ossé as the top candidate to represent the district, which covers BedStuy and Crown Heights. Tahirah Moorereceived Citizen Action’s second-place rank for the seat. Both candidates are life-long residents of the district and are running to fight for health care, housing, fully funded schools and more. Click here to read our full announcement. 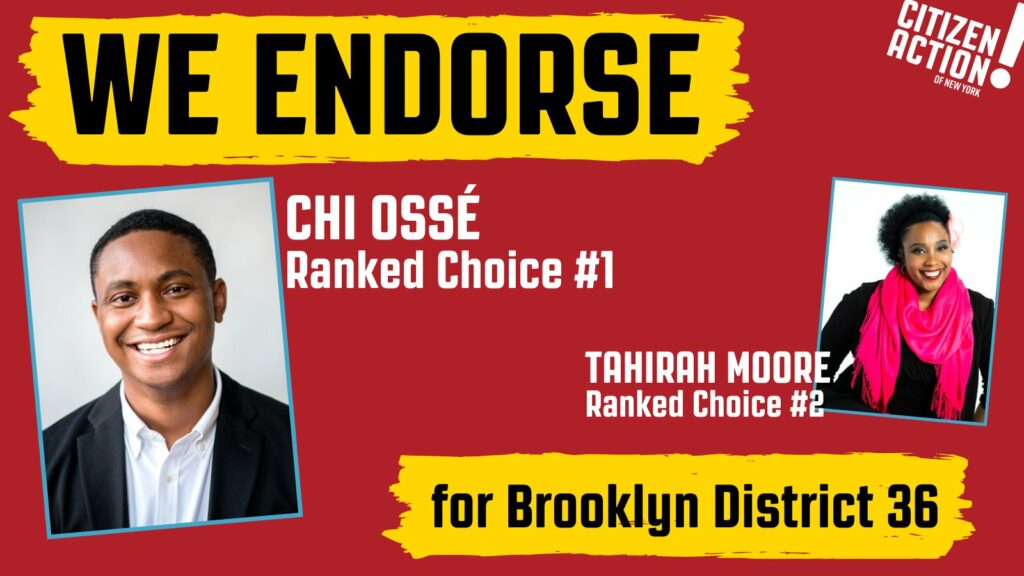 “I’m thrilled to have the endorsement of Citizen Action because for them to identify me as the candidate who most closely shared their values is an honor. Citizen Action’s work has been critical in the fight to make our shared city a stronger and more equitable home. In the new system of Ranked Choice Voting, their endorsement of our campaign as number one will aid in our path to victory.” – Chi Ossé, Democratic candidate for New York City Council District 36. 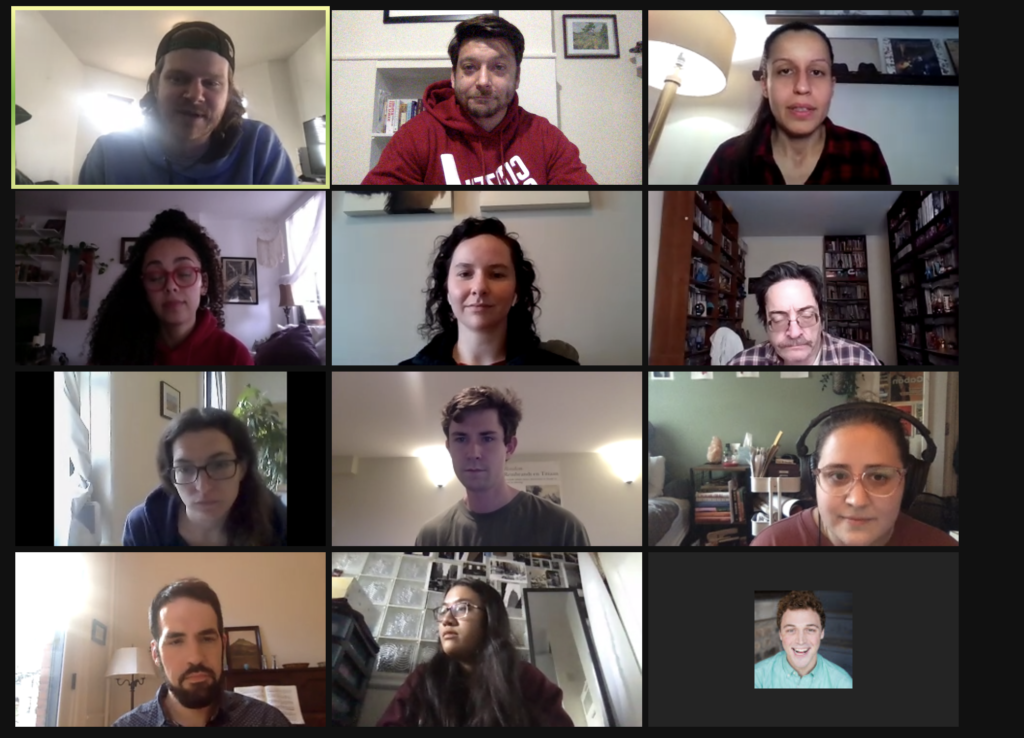 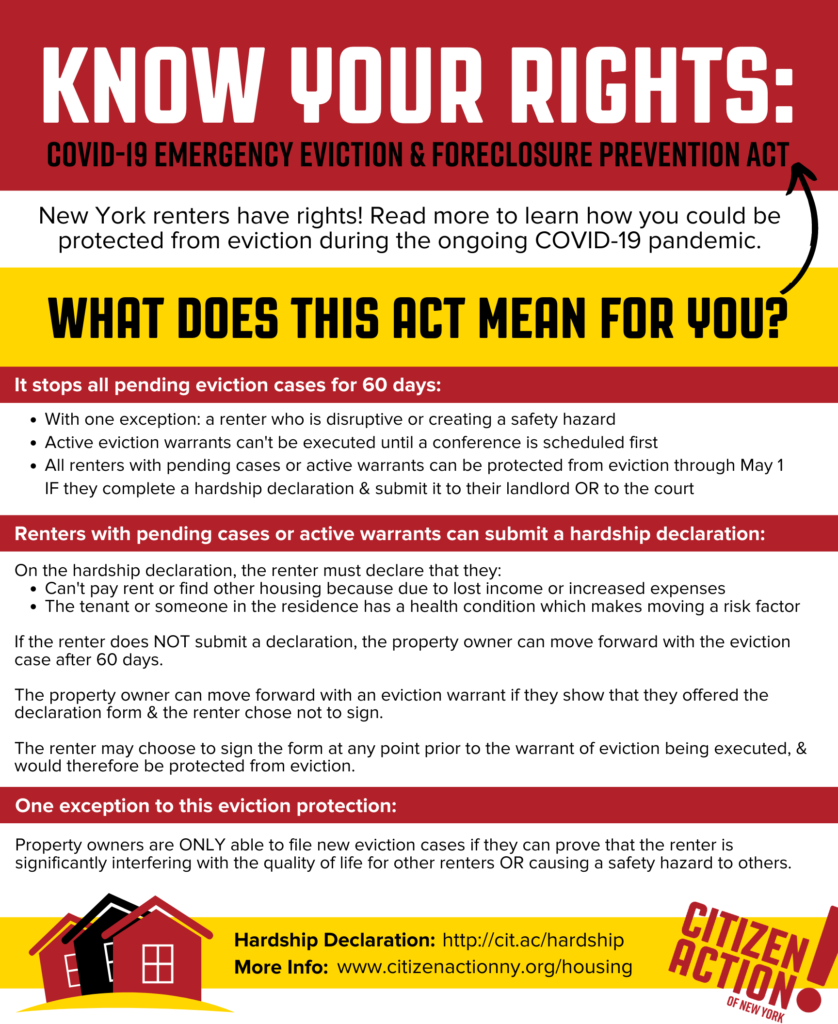 The state legislature is working this weekend and so are we. Take action with us Saturday & Sunday at 1 p.m. to show state leaders we won’t accept #NotAPennyLess. Click here to register.

Join us for a statewide climate week of action in support of the Climate and community Investment Act (CCIA) and the THRIVE agenda. From Long Island to Buffalo, communities impacted by unemployment, disinvestment, legacy pollution, and Covid-19 will take action to demand real, bottom-up climate justice policy. Actions include:

Join groups from across NY as we call on Albany to pass the NY Public Banking Act (S1762A/A5782) and create a framework for local communities to divest public money from Wall Street and invest in racial, economic & environmental justice! #PublicBanksNY Click here to register.

Join our Hudson Valley chapter for its Demand Justice Committee meeting! The committee will review budget highlights that will benefit the region and plan for the civil rights work ahead, specifically on Release Aging People in Prison (RAPP). The chapter will also review other demand justice issues they want to tackle before the end of the legislative session. Click here to register.

One of Citizen Action’s core workshops, Breaking the Cycle, explores the drivers of the criminal legal system through a dissection of its history and current power players. During the workshop, we practice using our imagination and build our vision of what safety in communities can really look like. Register here.

Interested in more Political Education workshops? Check out the schedule below! Click here for more information and to register for upcoming workshops. 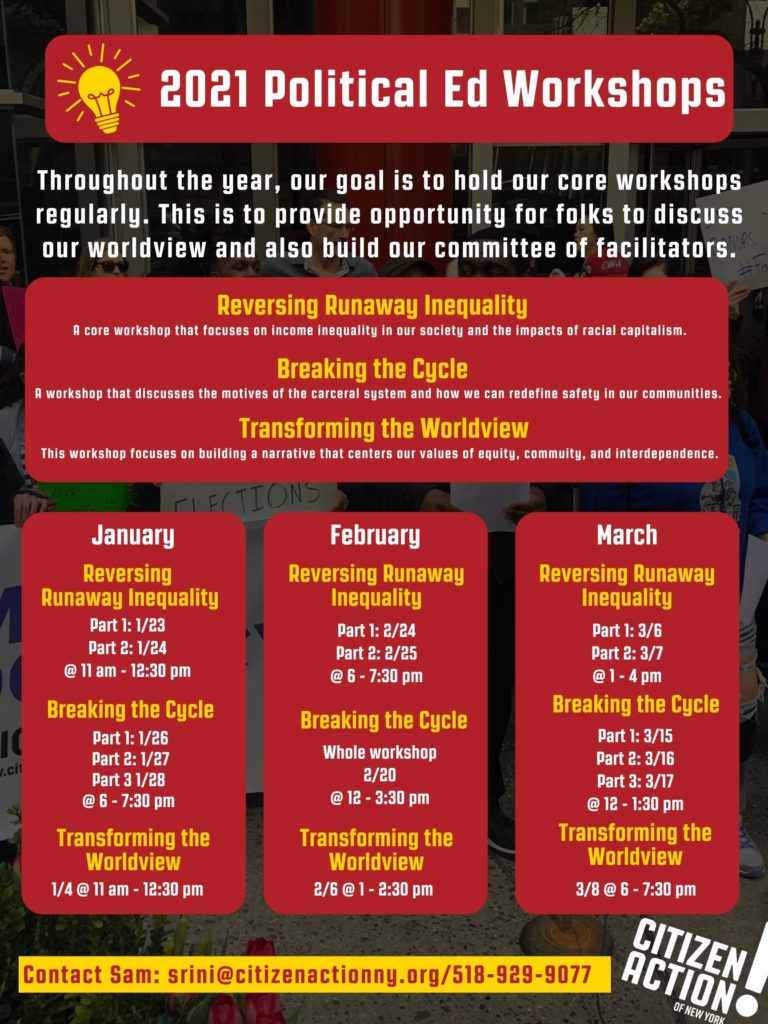 “For to be free is not merely to cast off one’s chains, but to live in a way that respects and enhances the freedom of others.” – Nelson Mandela