Progressive action in the Greater Utica area took a huge step on Aug. 15, when 27 Central New York Citizens in Action volunteers voted unanimously to begin the process of becoming an official Citizen Action chapter. We will be joining seven other chapters in New York State.

The biggest impact of this affiliation is having a dedicated organizer for the chapter to help build infrastructure and capacity. Kristina Andreotta began in that capacity immediately after the Aug. 15 vote, and will be staffing our area full-time beginning Sept. 18.

A member of the Citizen Action statewide training team, Kristina comes to us with a decade and a half of professional organizing, outreach, and leadership development experience.

“We have a real opportunity in Central New York to build power in communities directly impacted by injustice and inequality,” Kristina said. “I look forward to working with the incredible team on the ground to change the balance of power in Utica and the larger region.”

Immediate plans include building issue and functional working committees to build the chapter and promote grassroots progressive action on multiple fronts, such as health care, the environment, racial and social justice, public financing of elections and education.

Click this link to fill out a volunteer form and let us know how you can help.

The Need & Opportunity Have Never Been Greater

Since the 2016 election, progressives in our community have rallied to oppose the damaging policies of the Trump Administration and right wing majorities in Congress and our courts.  In the midst of this grave political challenge, we have taken heart in the commitment shown by so many in numerous actions of resistance.

We are just scratching the surface of what can be accomplished. The goal of CNY Citizen Action is to organize people and money in ways that have an impact much greater than anyone may have thought possible. We especially want to engage and build power with communities that are directly impacted by racial, social, economic and environmental injustices.

Please become a contributing member of our chapter and learn how you can volunteer.

The Central New York Citizens in Action, Inc. will be holding its inaugural Justice, Arts & Music (JAM) Fest on Saturday, Oct. 14 in Utica.

It will feature live music, crafts, art and film exhibits, speakers, children’s activities, and community discussions.  This showcase of local art and music will create a common public space for a dialogue on how we can bring about positive and progressive community change. The JAM Fest will be held at the DeSales Center, 309 Genesee St., and other venues throughout Utica from 11 a.m. to 5 p.m. on Oct.14.

We hope to raise awareness of what people can do through practical ways to make our community a better place to live.  We see this festival as building upon the success of the One World Flower Fest and Levitt AMP Utica Music Series and intend to make it an annual tradition.

The organizing committee is asking for event sponsors, donations, and volunteers to help with the event as well as volunteer musicians of all genres to perform, visual artists to display and create work, craft vendors, street theater performers, food trucks, sign makers, film makers, face painters, speakers and workshop presenters, sidewalk artists, poets, magicians, performance artists, sound/stage equipment, and local agencies to distribute information about services.  There will be a small vendor fee.

The organizing committee meets on a weekly basis. Go here for more information on how local citizens, businesses, and organizations can get involved, or call 315.725.0974, or email cnyjamfest@gmail.com.

Our Rapid Response to Rescinding DACA 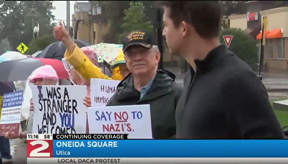 Within 24 hours of President Trump’s announcement to terminate DACA and threaten deportation of 800,000 people who were brought to the U.S. as children, CNY Citizen’s in Action mobilized a protest demonstration. More than 60 people gathered at the Utica Oneida Square roundabout on Tuesday, Sept. 5 in a steady rain that no doubt held down attendance.

Hundreds of passers-by witnessed our commitment to the Dreamers and we received TV news coverage on WKTV.